Tomorrow in retrospect - My thoughts but no prayers
Home Amiga On my surgery table: an Amiga 3000 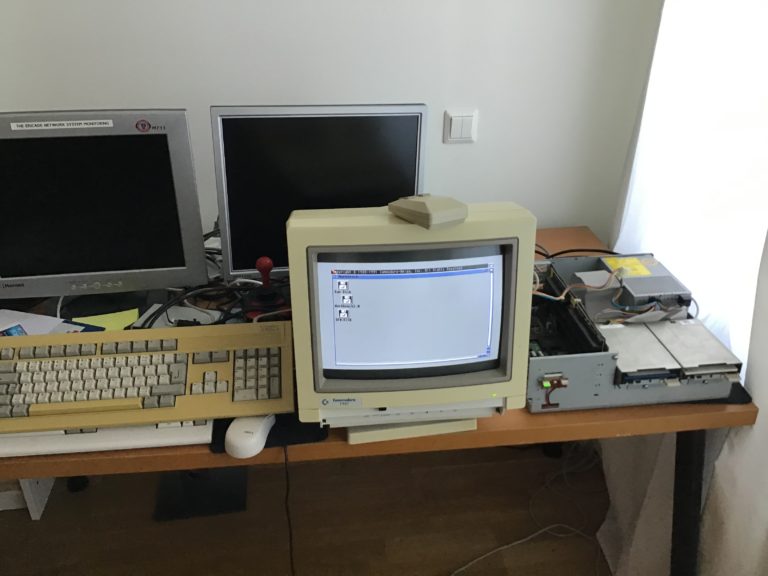 A few days ago, an opportunity came my way: an Amiga 3000 appeared on a retrogroup I often read. I just had to have it. A few days later, I boarded a train to a small city in the middle of Sweden.

The journey was uneventful. It was very nice to meet Mats, the seller, who have a big garage as the ultimate man cave filled with pretty much everything Commodore ever created. At he station on the way home, I came across an old engineer and we spent 1 1/2 hour discussing power distribution, gaspower, nuclear dito and memories from Sweden’s past.

When I came home and hooked everything up, I was met by this.

I have never seen something like this before. Clicking on either of the “Floppy” buttons lead to the computer asking for a super kickstart.

–“What, isn’t the regular one, you already have enough?”.

Actually, I already had figured it out. This computer requires a kickstart boot rom on disk. Googling on it, revealed this to be true. The first Amiga 3000 had a hardware kickstart boot rom that was incomplete. It wasn’t the old 1.3 or the new 2.04. Rather it was known as Kickstart 1.4 and that’s what is on the screen. It needs to have a file of either 1.3 or 2.04. The hard drive was dead, so it could not supply one. Hence this screen crying for help.

But where to get a super-kickstart disk? Well, Mats the seller had provided me with a diskette he said could boot the system. It didn’t work. So I decided to put it in my Amiga 500 to see if it was ok.

I might have been the lamer here, but the antivirus saved me. Trying to scan the disk further revealed that the Saddam Hussein-virus was present as well.. Party on, dudes…

Right. This is a bit problematic. The disk was put in a bio hazard cotainer and will be delivered to SIPRI tomorrow..

The retro group on Facebook delivered the solution after I posted a request for one of those pesky “superkickstart”-disks. Turns out Cloanto sells those as file for AmigaForever. Finally a break through.

I generated the 2.04 disk and inserted it into the computer and it promptly started to boot with it. After that I got the nice boot image.

This is where my luck ran out. It just wouldn’t boot. I popped the WB 2.04 disk into the diskdrive. Nothing happened. Giving the keyboard the three finger salute (Ctrl-Amiga-Amiga) did work! Then Workbench started up just fine.

It was pretty soon clear to me what was going on. The diskdrives would happily read any disk that was inserted at the time the computer warm started, but would then never detect when disks were later removed or added.

Googling the problem didn’t help as I came up empty… And that’s where I am right now.

I have not given up, but for now, the work has be postponed, as I have a radio station to setup.