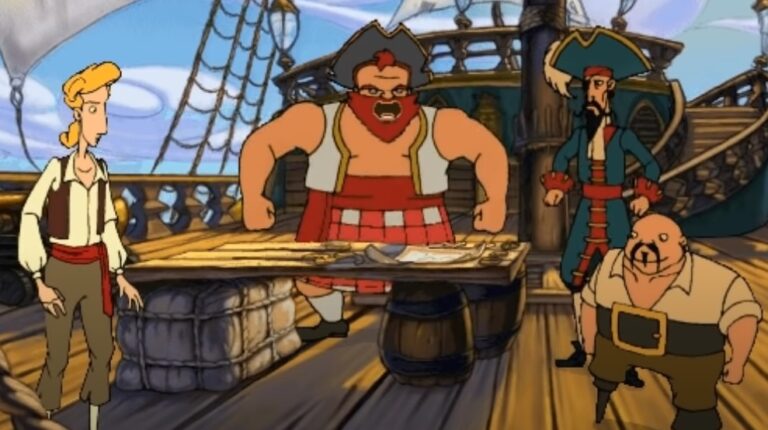 Shiver me timbers! It’s all about software piracy! We talk diskettes copied, Jan Svensson on the prowl and the 1337 Warez D00dz.

00:00 Flashback – tracks from the past – show intro
00:12 DJ Daemon speaks: Shiver me timbers, it’s a new name for the podcast. And today, we talk about pirates! <A pirate I was meant to be> No ships, no cutlass and no beer swilling on the tavern. It’s all about those pesky software pirates and the lamers who loved them…

00:31 BeaT of Osmosys – Celestial Fantasia
06:16 DJ Daemon speaks: So… Why are those that copy commercial software without permission called pirates to begin with? It has nothing to do with crimes on the seven seas. Actually it relates to the “pirate radio stations” of the 50s and 60s. Those stations were often located on ships, broadcasting from international water, where the law of the countries they targetted would not apply. When the kids in the school yards in the 80s started copying diskettes with commercial games, the term was re-used. But a pirate generally does not refer to the end-user, but actually to the crackers and the distributors. Let’s talk more about that after a relaxing tracked tune.

07:16 Xerxes – Marie
11:40 DJ Daemon speaks: Let’s talk piracy in Sweden. I once interviewed Pontus Berg or Bacchus as he’s called in the cracker group Fairlight. He explained that in the first years when Fairlight existed, distribution of commercial software without the copyright owner’s consent was legal. But diskettes with commerical games and applications were protected in order to make copying impossible. Groups such as Fairlight and Triad here i Sweden disabled this protection and also distributed the software. The industry initially begged them to stop, but then it became illegal, the attitude changed pretty quickly….

12:33 Jester of Sanity – Stardust memories
16:23 DJ Daemon speaks: In the early 90s, a lot of us geeks read the Swedish computer magazine “Datormagasin”. Issue number 16 of 1993 spread shock waves through the community, as “Jan Svensson” entered the scene. That was not his name, but he did exist. A pirate-hunter that preyed on those copying disks. There was just a problem: it wasn’t true. The article was kind of open about the true purpose of him, but the picture and the head line made a lot of people believe that he targeted teenagers copying disks with each other. In reality, he actually tried to gather evidence to convict big bulletin board systems selling illegal copies.

17:22 Skaven252 – The Goblin Returns
20:19 DJ Daemon speaks: Jan Svensson was described as a former “big time pirate” turned informer belonging to SIMP, a precursor to the Swedish organization “Anti-piratbyrån”. And in 1993, his work may have helped bringing down a big BBS in the Swedish town of Helsingborg. The sysop for the BBS called “Scandinavia” was convicted and had to pay 8000 Swedish kronas. That’s about $1300 in today’s monetary value. The thing that made them target him was that he charged money yearly for access to the pirate copies on his BBS.

21:17 Ahlin – Ps Deep Fantasy
23:23 DJ Daemon speaks: So why did we copy diskettes? For me and for many in my situation, we could not afford the games as we were teenagers or even kids. But that’s off course not a valid legal reason. So I don’t offer it as an excuse – rather an explanation. When I go my first modem, I actually didn’t pirate much at all and pretty quickly stopped as I didn’t really care about games and saved money to buy software instead. Not so much just an ethical decision but much more that i disliked the warez communities and their high brow cameraderie and self-absorbed attitude towards others. I respect the crackers, though…

24:15 Anvil – Path to Nowhere
28:39 DJ Daemon speaks: The warez-BBSes were the places where you could get the newest “cracks”. That is, the latest games and apps with the copy protection disabled. The word “elite” as often described by the number combination 1337 comes from same the bunch of people that saw themselves as the best of the best. But they were often shunned by many others. The warez BBSes required that you were recommended by others in the warez scene in order to gain access. This protected them from the law (or so they though) and made them feel special.

29:25 Laamaa – No use for a name
31:05 DJ Daemon speaks: No-one has better described the Warez doodz than legendary programmer Eric S. Raymond: “The cracker d00dz have a gift culture which thrives in the same (electronic) media as that of the hackers, but their bahaviour is very different. The group mentality in their culture is much stronger and more exclusive than among hackers. They hoard secrets rather than sharing them; one is much more likely to find cracker groups distributing sourceless executables that crack software than tips that give away how they did it.”.

32:19 Anvil – The Love Trap
36:40 DJ Daemon speaks: The last word on Warez Doodz is from the user Ozone Pilot : [BELONG] is the only word you will need to know. Warez d00dz want to belong. They have been shunned by everyone, and thus turn to cyberspace for acceptance. That is why they always start groups like TGW, FLT, USA and the like. Structure makes them happy. […] Warez d00dz will never have a handle like “Pink Daisy” because warez d00dz are insecure. Only someone who is very secure with a good dose of self-esteem can stand up to the cries of fag and girlie-man. More likely you will find warez d00dz with handles like: Doctor Death, Deranged Lunatic, Hellraiser, Mad Prince, Dreamdevil, The Unknown, Renegade Chemist, Terminator, and Twin Turbo. They like to sound badass when they can hide behind their terminals. More likely, if you were given a sample of 100 people, the person whose handle is Hellraiser is the last person you’d associate with the name.

38:16 Necros – “Ascent of the Cloud Eagle”
43:01 DJ Daemon speaks: Linus Walleij here in Sweden disagrees with mr Raymond. When he wrote his rebuttal, he was part of the cracker group Triad.

43:45 Jeroen Tel – In my Life, my Mind.
48:34 DJ Daemon speaks: I respect the cracker groups, but see the Warez D00d-sysops as way to self-absorbed for their own good.