Tomorrow in retrospect - My thoughts but no prayers
Home Radio A good advice for a radio dj: shut up, already! 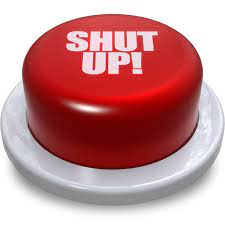 I started my latest radio station project 10 months ago. It’s still running to this day but is still a small outfit with a limited number of listeners. You must understand that currently, getting people to pay attention is harder than ever, as everyone is into streaming, podcasting and blogging. A friend of mine spoke about “eyeball time”, but in radio we can talk more about “ear lobe time” instead.

When I started my first broadcast ever in 1994, I had no idea about timing. But it slowly came to me just how little time you have to speak before listeners go away. For this discussion, I will talk about music stations as they are the most heavily affected by this. A talk station is supposed to provide spoken material and some station have a relaxed 2-3 minutes of speech between the songs. It depends on what you are creating.

My station plays tracked music made on Amigas, PCs and Ataris. People tune in for the music mix. When I started Voice tracking the first days, I noted in horror that people turned off as soon as I started speaking. This I know, as Internet broadcasting, let us you see disconnects and unfollows. Was something wrong with my voice. Apparently not. I simply had to relearn old lessons from my years in broadcast during the 90s. I did not understand the rules of this station as I thought about making it a mix between stories from the past and great music. it wasn’t working.

i started timing myself, and gave me a most 30 seconds to speak, but swiftly understood that even that was too much. I ended up speaking between 5-20 seconds with the odd voice track going all the way to 30.

I also decided that the clock should allow three songs to pass without voice tracks, jingles or messages. So, my live shows/voice tracked had me speak four times per hour. This and shortening the messages and the jingles down did the tricks. Disconnects during all non-music events went down close to zero. That was a painful lesson, but a necessary one.

It may not be the proper solution for everyone, but it seems to be a general rule. I remember getting the message during the 90s with a caller waiting to be put on the air. I spoke for 40 seconds of an event and as I put the next song on and came back to her, she said something like “Gosh, you really say a lot on the air”. This was a rather dire warning, but heeded, eventually. Then forgotten and relearned.

For everyone trying to nurture a cool voice, attitude, and persona: please do not forget the best you can do, speak less!