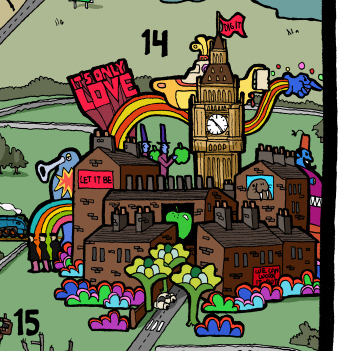 In 2010, the prolific and unorthodox mind of Winston Rowntree created the comic that the picture above was taken from. It’s called “The museum of the theoretical“. The story of this strip is about a woman who finds the “Museum of the Theoretical” an outfit that deals in things that COULD have been. As for most of Rowntree’s creations, it is really a treat for the imagination.

The poster behind the woman who owns the exhibition shows the last Beatles album that COULD have been and it is titled “Imagine a photograph from a passing jet”. It is a brilliant joke.

We know that the members of the Beatles actually made songs in the last years of the band, that ended up on their solo albums like “All things must pass” from George Harrison and “Jealous Guy”/”Child of nature” from John Lennon. It also references the songs “Jet” from Paul McCartney, “Imagine” from John Lennon and “Photograph” from Ringo Starr.

But mr Rowntree (That’s not his real name by the way) continues to deliver as Beatles is a recurring theme within his comics.

Tomorrow never knows follows the fictitious (I hope!) story of John Lennon being bothered by time travelers. He seems to be used to this kind of crap and simply ignores them.

A->B Road (See what he made there?) is built around your life as the medley from the back side of legendary Beatles album Abbey Road. It points out that days and the need for sleep removes the impending feeling of doom that would be with us all the time if life was just an endless stretch of time leading up to the inevitable eternity of non-existence.

Musical Wheres uses cities as metaphores for well known bands. The image “alt”-texts are to die for in this picture:

You probably know just how much I love the original Twilight Zone TV-series, and mr Rowntree’s webcomic “Subnormality” seems to appeal to that mind set. You know philosophical drama with darkness and hope mixed.

He also drew stuff for Cracked.com, like this rather cynical take on the music industry.

And to end the discussion with something I do not agree with, but that is an interesting take on Beatles anyway: