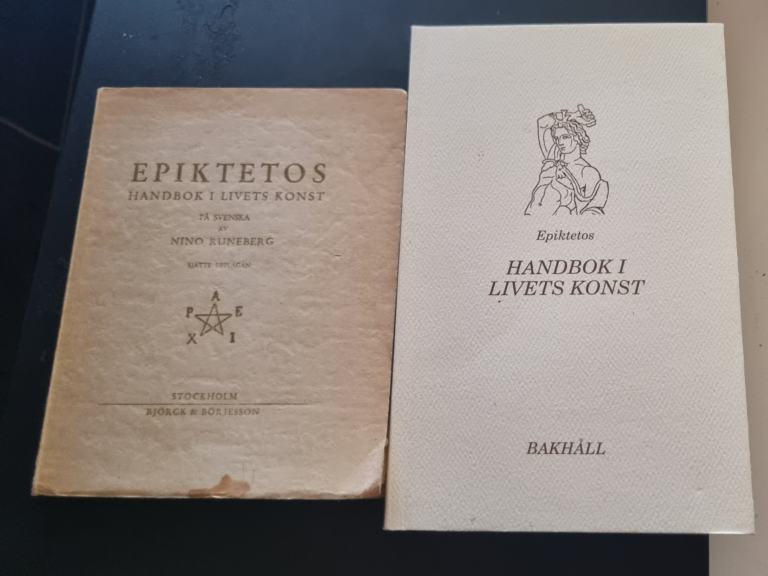 My mother loves citing Epictetus. I’ve heard quotes all my life, and they always intrigued me. She told me once that she saw Epictetus’s “Discourses and Selected Writings” on the sleeping room table of her father and mother and started reading it. Obviously, it resonated with her, and so she learned of stoicism.

In modern time, I sought stoicism mostly by stumbling across the Facebook group and I reconnected with old memories of what I’ve been taught. I loved it and felt that it had to be a solution how to better myself.

In retrospect I was (mostly) able to, and sometimes not. The process had its ups and down, and as I struggled to understand the parts that seemed hard for me to live by, the problems with stoicism became clear to me. In my opinion, the fundamentals are good, great even. But its chief problem is how uncompromising it is.

Just understand that I talk about stoicism, not Stoicism. As in, the “way for a better you” and not the religion. I’m not a great fan of Zeus, you see. Sorry if that offends anyone. He was not a great character in my book.

Before we start, let me say that I still read stoicisms teachings and apply them to my life. But I’ve given up on the idea of reaching it and becoming a true stoic, which many of my older text already reflects. So, what’s the reasons of that, in my opinion?

Problem 1: It will not let you compromise

“You can only control yourself”

“You cannot complain about feeling that you have no control over”

“You must silently bear your emotions”

Seriously, why??? Epictetus was limping through most of his life. The reason is unknown. Some people say that it was congenital. But legend has it that his slave owner, Epaphroditus, tortured him by breaking his leg. Epictetus answered, “Soon my leg will break” and then pretty much said “Told ya’ so” when it did.

Ok, could you do that? I certainly couldn’t. I would cry and scream, like most people. Torture always works. it’s just about finding a person’s breaking point. Awful subject let’s drop it.

But really, why is stoicism not allowing errors and non-adherence? Probably too hard to define how many retries you have before you must return your “stoicism club card”. Seriously, it does make people fail!

It’s not an easy problem to solve. If you think about the yo-yo behavior of failed diets, you understand that it’s deeply human to fight to better yourself yet failing. And still, “x is not a true stoic because x whines too much”. Right! That’s forbidden now. No, whining. (As I am right now, by the way).

Push as much discipline as you can into applying your self-reflections into betterment. If you fail, understand why, and work with it. Make the uncontrolled situations rarer and less obvious. Often, I blame myself for when I get angry at some bleeding, insignificant problem like why VSCode applies </div>-tags when I don’t want it to, or some idiotic mail makes me say snarky stuff when I’m all alone. It’s small but becomes a problem if you don’t try to silence your emotions. Evetually, people will be around when you scream that Sataya Nadella (Microsoft CEO) should “#%#¤%&%”¤”¤%&/&&”%#.

Problem 2: the horizon of change – you may not even try

The tenement of wisdom is about knowing to differentiate between what you can change and what you cannot.

How would you even know?

I mean, without trying. We gain wisdom by trying what we cannot predict the outcome of. It’s a false positive – false negative problem, really. As in if I cannot know, should I prefer believing I can’t change it, when it turns out that I can (false negative)? Or that I must avoid changing stuff if I even I might be able to pull it through (false positive)?

I believe in the wisdom tenement is about giving up when it’s clear to be a failure. This calibrates towards the false negative stance. But still gives it a shot. Paul McCartney tried to save the Beatles in the late 60s with the “Get back”-tour. It ended up becoming the “Let it be” album, released after the Beatles had split up. I’m just putting that out there. Please, please me by pondering about that.