I generally avoid being too political in my blog, as I do not like how much those discussions tend to derail on the Internet and therefore, I try to avoid adding to this train wreck. But a friend of mine hinted me about a political post made by Ida Nafstad and Amin Parsa who are both associated with Lund’s university here in Sweden. The post was published by several local newspapers, including Sydsvenskan on the 18th of July 2020. As it is in Swedish, I have had to translate the excerpts I am quoting in my comment.

The article starts with the soft touch of a sledgehammer with the headline “The alternative to today’s racist police work: dismantle the police”. Right! Where do we start?

To cook down their article, they make the following claims:

Those are only the most egregious parts of their article, but it says plenty already. They claim:

“We state that only minimal problems in our society need to be solved by the “monopoly on the legitimate use of physical force” and that the police can by and large be removed.”

Two questions from yours truly:

First question: So, what DO they suggest instead?

“A redistribution of resources can be used for local initiatives, for an example where the citizens themselves negotiate in conflicts. To stigmatize some parts of the city as parallel societies will only make social problems worse”.

Awww…. Come on! This is not dismantling anything. You just delegate the tasks to anyone you think should do it instead. And who will decide this? You? Your equally disconnected-from-reality friends? Should the remainder of the police decide this by deputizing some unqualified local guy every time something happens?

Becoming a police officer is not easy. Physical strength and agility is a must and good observational skills, being able to be cool under pressure, having social skills and the ability to be fair and restrained will be tested. Fail on either of these skills, and you will in fact not be joining the force. The requirements are tough and will make you prove you can justly serve the law.

So, let’s look into how it may work after you remove the police in Sweden…

If whoever-is-still-in-charge deputize someone who is unlikely to be qualified for the task, and they kill someone, whose fault is that anyway? If you say the police, well, bad news, they’re actually not there anymore due to your actions. And if there are some governance left, they can’t do much about it. There will not be a police force that can penalize the errant deputy… What you have in effect done is removing the nation’s control over its criminality. ALL criminality. To quote Hudson: – “Game over, man”.

Second question: What do you think will happen if you dismantle the police here in Sweden?

There is an old joke that goes something like “Every country has a military force – its own or someone else’s”. The same can be said about the police. Remove the police and just wait awhile. Anarchy is weirdly self-organizing and the government watching over you will be replaced by the local warlord’s own police force. This one will not have rules of engagement, regulations and limits to what it can do. Just try to protest them and see where that gets you… Probably very dead.

The new policing will be as good or bad as the local leader is and wants it to be.

Being rich is bad?

The article notes that there is an app called WCCRZ (White Collar Crime Risk Zone) that tries to detect financial crimes, which are more common among the part of the population that is rich .

Our two Don Quixote-afflicted brainiacs seem to agree with this point, missing the whole idea with the project…

The point of this project, which the article off course doesn’t bother to tell you, is that it uses satire to point out flaws in some sites and services predicting crimes using questionable algorithms and historical data.

The project is not trying to say that the world will be full of unicorns and rainbows by removing the police altogether. It does, however, note that other predictive policing services do show proof of racial bias. I do not deny this.

So, the police are flawless?

No, I do not think so. And my worries lie along the lines of them having too much capacity to keep an eye on people that are not suspected of any wrongdoing. But that is out of the scope of this discussion. For me, it is quite easy to see that our police force and by extension military, although sometimes flawed, is a force for good in Sweden.

And, no, I do not think the police force in itself is racist here in Sweden.

And to sum it up

I have tried very hard not to speculate about their political views and possible affiliations, but I doubt the article is anything less than a tip of an iceberg. Applying Hanlon’s razor, I choose incompetence over malice here. But I may have to revise this decision.

This misinterpretation of the whole world around them is asinine at best and dangerous at worst. The researchers seem to be living in dream world and have a … if I put it kindly … loose connection with reality. And some screws too…

Flaws with predictive policing (It does add racial bias):
https://www.mic.com/articles/156286/crime-prediction-tool-pred-pol-only-amplifies-racially-biased-policing-study-shows#.DCb3LLtwc

The article (In Swedish):
https://www.sydsvenskan.se/2020-07-18/alternativet-till-dagens-rasistiska-polisarbete-nedmontera-polisen

In our podcast, I and Mattias discuss the future of policing in a world of face recognition (podcast is in Swedish):
https://www.itsakerhetspodden.se/podcast/83-turerna-kring-ansiktsigenkanning/ 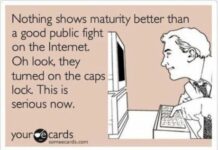 Political discussion… or when your best recourse is silence

It stopped being funny a long time ago…

The shelter – a study in where pure desperation leads us